Welcome family (Mr 27 and Miss 25), friends (Liz, Elaine) and readers (Does anybody else read this? If so, please feel free to say HI! in the comments!),

And just like that, we are a third of the way through 2022! Here’s what happened during April …

1 April – April Fool’s Day … Fleur was pretending to be cute – HA! APRIL FOOL!!!! Check out the picture under 3 April and you’ll see what I mean. 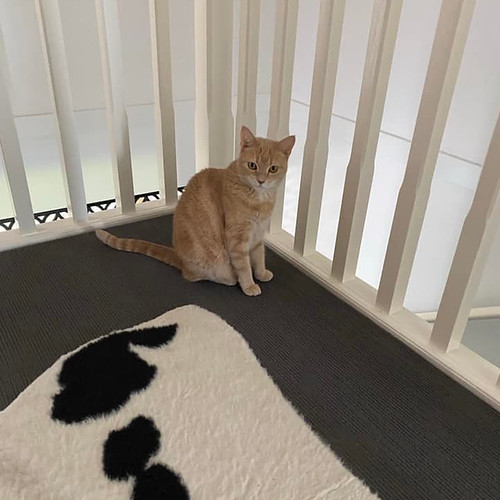 2 April – Miss 25 and I went on an awesome adventure – shopping at DFO! We had coffee and gingerbread men for morning tea (is that sexist? I’ve never seen a gingerbread lady!). I found a lovely new skirt and top for work at the Jacqui E outlet store. 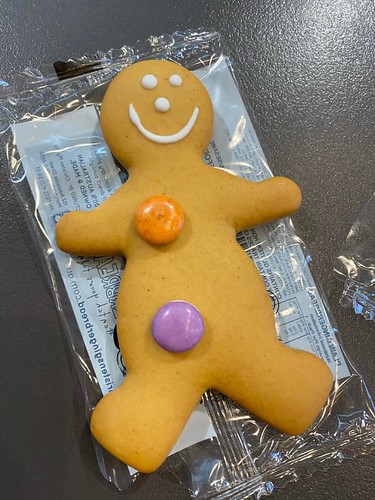 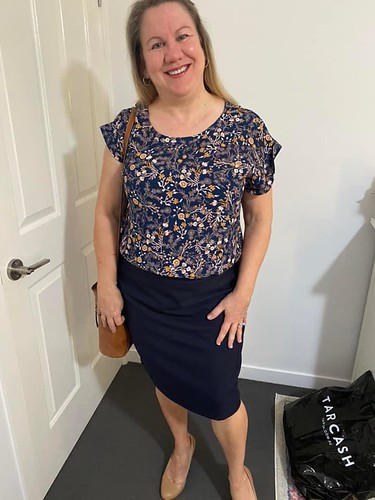 3 April – Miss Fleur is in the bad books. I ignored her while I was sitting on the couch, reading a book – she kept head butting me and begging for pats – and in the end she took a swipe at me. How rude! (You can see why we joke that she’s the #worldsworstcat!) 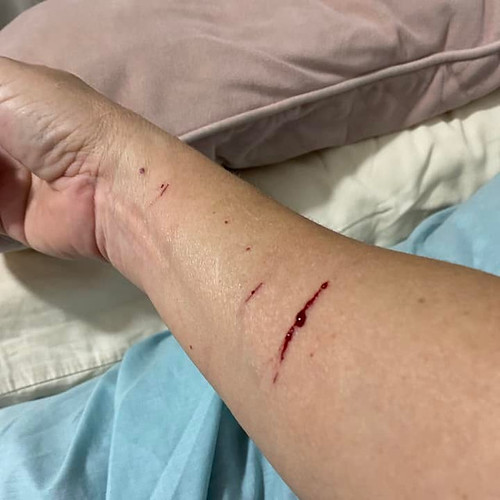 5 April – Attended a business breakfast with my lovely team member Lisa. Nothing so unusual about that except – have I mentioned that I’ve never actually met Lisa before?! All of my team works remotely, so it was lovely to catch up in real life, rather than in a Zoom meeting! 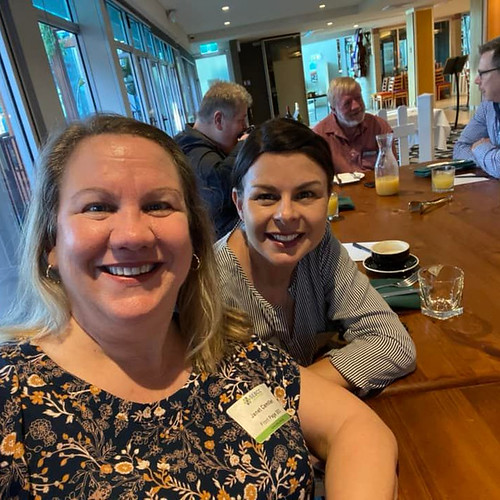 6 April – The husbear is currently working as a contractor (which he loves) but his employer is keen for him to become a permanent part of their team, so he has put in an application for a position that’s come up. Being government the wheels turn ever so s-l-o-w-l-y so it will be a while before we know if he is successful or not. Not that it matters – he’s already been offered a couple of other contracting positions lately, so is definitely in demand!

7 April – The husbear surprised me with a treat when he walked in the door after work – a mocha chiller from Zaraffas (or Z-Raffs as we call them, picked this abbreviation up from the kidults). Let’s just say I didn’t need any dinner after that! 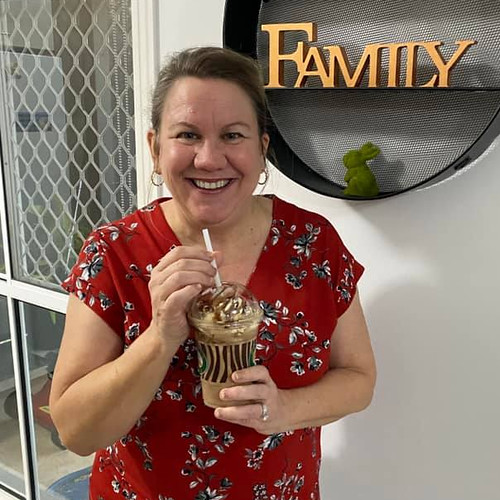 8 April – A lovely evening out for dinner for my sister’s birthday. 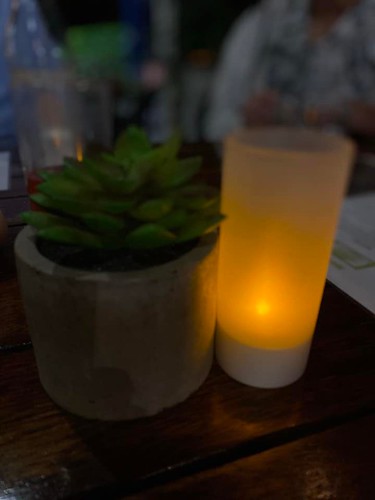 9 April – Mr 27 came over to do his laundry (he doesn’t have washing facilities in his unit), and we watched a sci fi movie on Netflix called “The Adam Project” – 10/10, definitely recommend. I made meatloaf for dinner for the first time in ages! 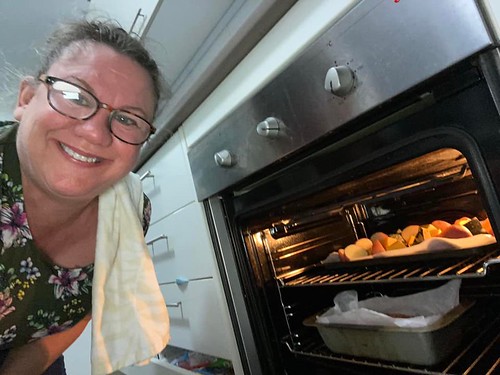 10 April – The time has come, the husbear and I took out health insurance (hospital cover only). Late in the afternoon we heard a helicopter circling – and it was playing a message, “Stay inside and lock all doors and windows, there has been an incident in X Street” (near us) – what the! After about half an hour we heard another announcement that it was now safe to leave our homes. (We never did find out what the incident was, it didn’t seem to be on the news). A bit of a strange experience. Fleur couldn’t understand what all the fuss was about … I mean WHY would anybody want to go outside anyways?! 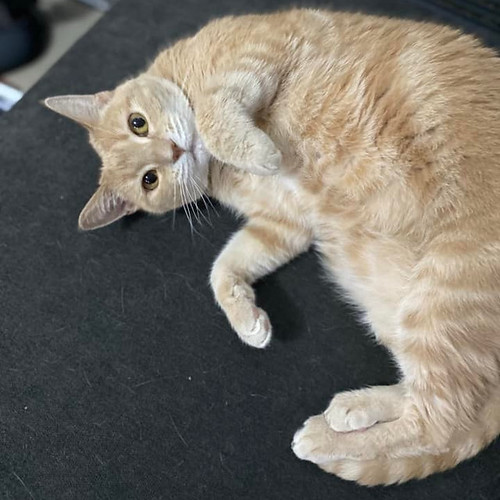 11 April – I’ve booked a photography session with my new team members (for images for our website and social media). It’s coming up fast, so on Friday I ordered a couple more white cowboy hats for them (part of my business branding, as we are the “good guys” in SEO, an industry that is unregulated and sadly has a bit of a bad reputation). Would you believe the package was delivered first thing this morning (Monday)?! How’s that for customer service!!!

12 April – A little bit of reading before bed. I like to read a couple of pages each night. 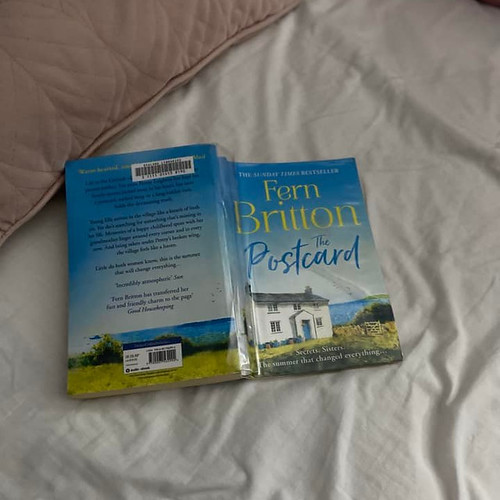 13 April – We’ve been so busy that the yard is looking a bit overgrown, so I got out the mower before starting work – at least the front looks neat now! 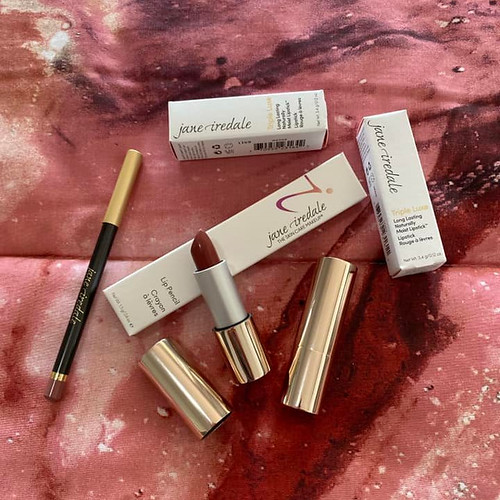 15 April – Good Friday. We headed up to Toowoomba, as we’re spending the long weekend caring for my mother-in-law.

16 April – The husbear sent me out for a bit of retail therapy, and I got a few odds and ends – a new pair of black heels for work, a pair of cute PJs for Miss 25 (half price!), a couple of pairs of shorts for the husbear, and a 500 piece jigsaw puzzle (it was only $2)! As I was wrestling with all my bags to put them in the car, the boot lid fell on the top of my arm and I came up with a big bruise – ouch! (It got worse later in the week but I didn’t take any photos.) 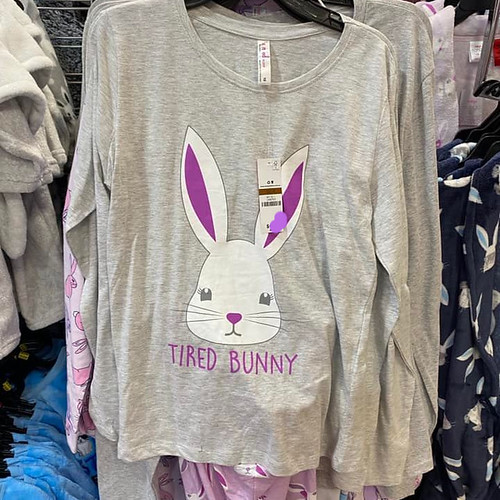 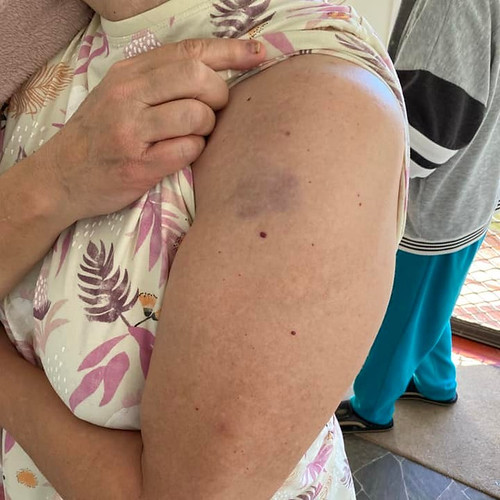 17 April – Easter Sunday. I was impressed that the Easter Bunny found us even though we were away! We set up my laptop so we could livestream Mass to the TV for Mum, then spent the afternoon relaxing. We also watched Avatar – it’s been years since we last watched it, such a good (but very long!) movie. 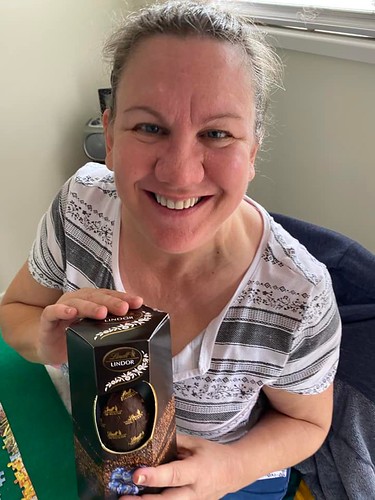 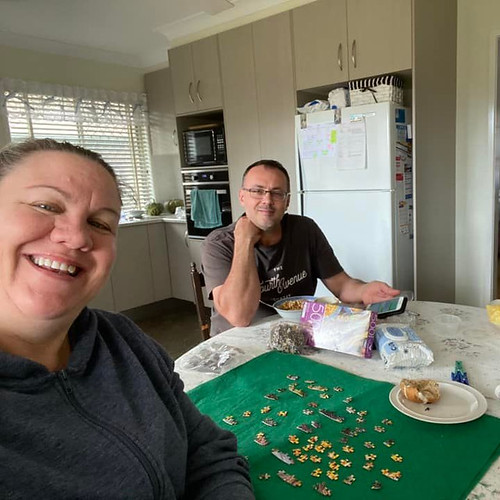 18 April – Drove home from Toowoomba – Fleur was very happy to see me!

19 April – Ugh what a day. It seems my technology thought it was still on Easter holidays which wasn’t very helpful as I had to conduct a webinar, which was fraught with issues. Ironically I thought this was the best prepared I’d ever been! LOL. We got underway a bit late as a result, and I ended up having to do it on my laptop rather than from my office computer which limited things a bit – I have 3 screens in my office, whereas just one on  the laptop. I managed okay but it was so exhausting! 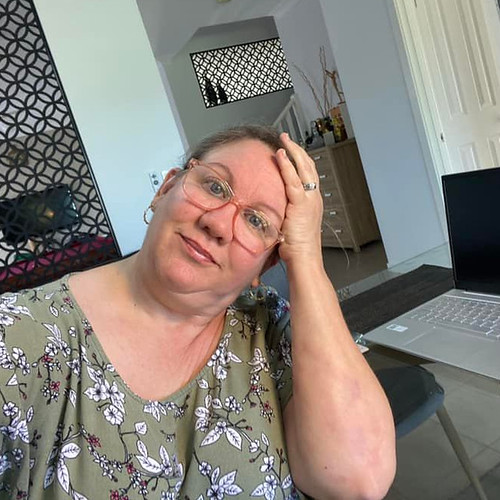 20 April – The moon rise was amazing but photos never do it justice! It was a pretty peach colour. After work the husbear and I relaxed by watching some Star Trek: The Next Generation. I bought him the entire series on DVD for his birthday several years ago now and we are only just on the seventh (and final) season – we go through stages where we binge, and others where we forget about it for months at a time! 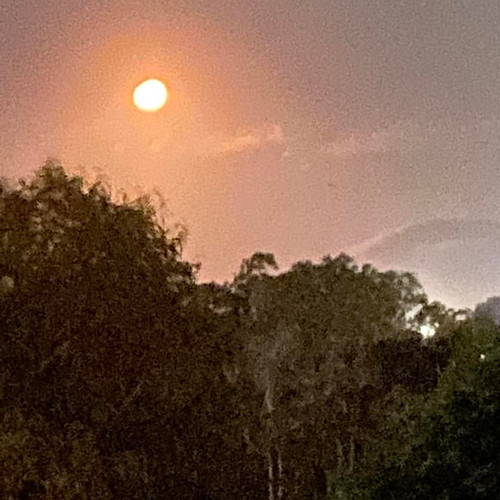 21 April – Had a lunch meeting with my business coach Cathy, near her office in Raby Bay Harbour. 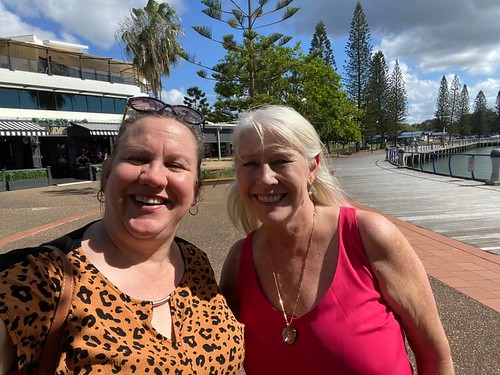 22 April – It felt like ages since we’d caught up with the kids and their partners so we met up at South Bank for a family dinner. The husbear wanted to introduce me to the delights of scootering – we hired e-scooters and rode from near his work in the city, through the Old Botanical Gardens, and across the river to South Bank parklands. I was pretty unsteady at first but soon got the hang of it, though it really seemed to exacerbate the pain in my wrists which I’ve been experiencing off and on for a year or two now. Must do something about that … 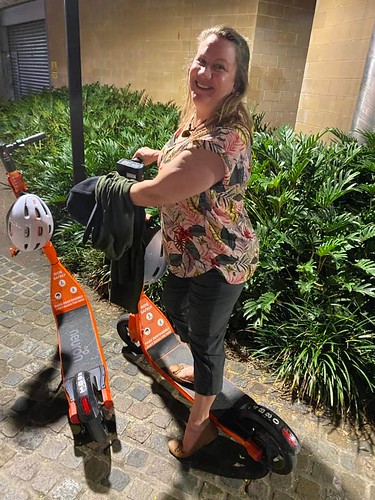 23 April – Finally finished that 500 piece puzzle I started at M-I-L’s over Easter – I’d originally thought I would finish it while we were away! Yeah … nah! 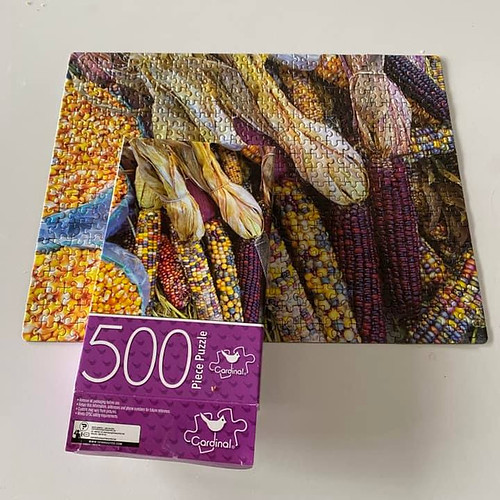 24 April – The husbear went fishing and caught a bream, Seth was very excited as you can see … look at him licking his lips! 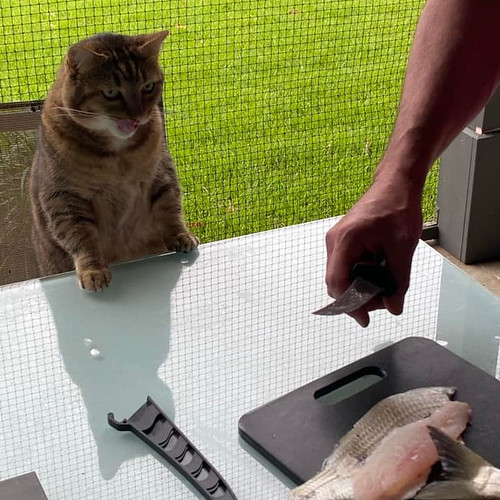 25 April – A rainy day for the Anzac Day public holiday. The past couple of years we’ve had a great vantage point on our deck for the flyover of the FA18 super hornet, so we were waiting for it again … and waiting … and waiting … and then we gave up. We thought maybe it had been cancelled due to the rain, but later found out that the route was different this year so we missed out.

26 April – Soup weather! Love my soup maker. Yep, the seasons are definitely changing. After work we watched a rom com on Netflix – “When I First Met You”. 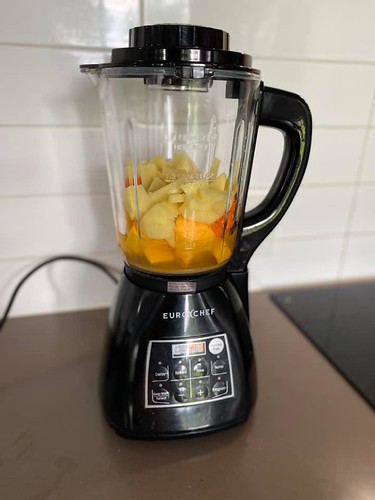 27 April – Time to start taking care of myself. I had a chiropractor appointment in the afternoon (my sore neck and shoulders are a lot better these days, but I see my chiropractor every month or so to make sure it stays that way!), and I also booked some medical appointments/checkups for May, including:

The joys of getting older!

28 April – I had a chat with a mindset coach about some issues I’ve been having with my business and it was very helpful, I had a couple of “Aha!” moments. Now to put it into practice!

29 April – I love this mat that we have by the back sliding door. If I could find more, I would have them in the kitchen and at other doors throughout our home. I did a Google image search but alas, nothing similar came up. If you happen to see one in your travels, do let me know!!!! 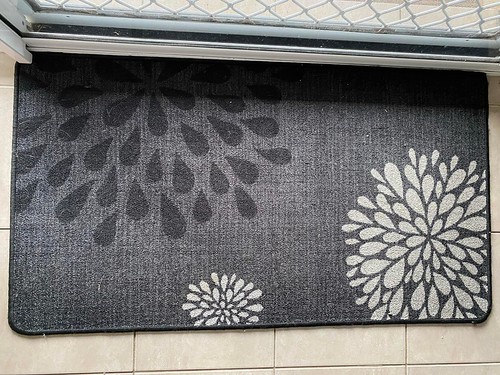 30 April – Mr 27’s engagement party was a lunch time affair, and a chance for both sides of the family to meet up before our very own Big Fat Greek Wedding in December. Our “almost” daughter-in-law has requested anonymity so I can’t share any photos of her, but here are a few happy snaps from the day. They look so very happy together and we are delighted with Mr 27’s choice of bride; in fact we are pretty pleased with both of our children’s choice of life partners. As a parent, all you want is for your kids to be happy so it makes us very happy to see that they are! 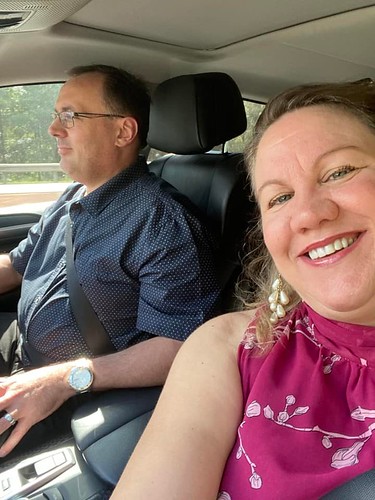 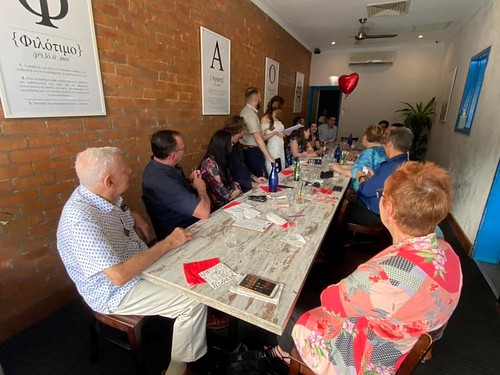 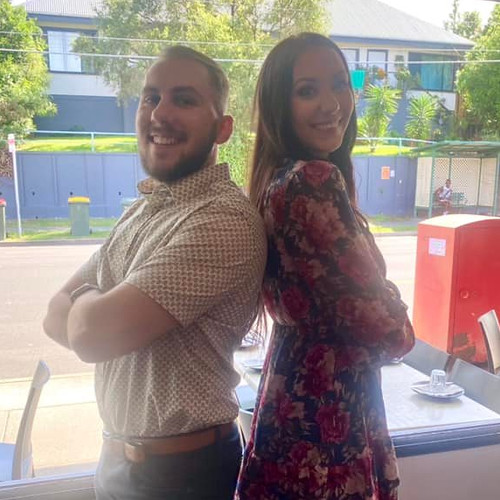 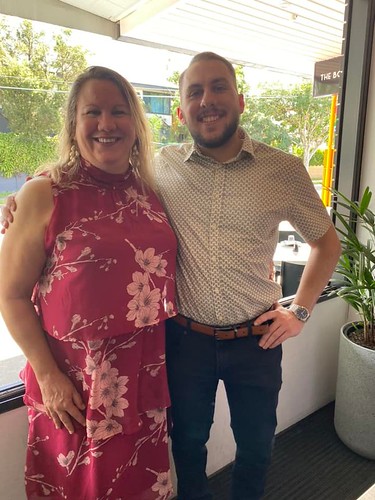 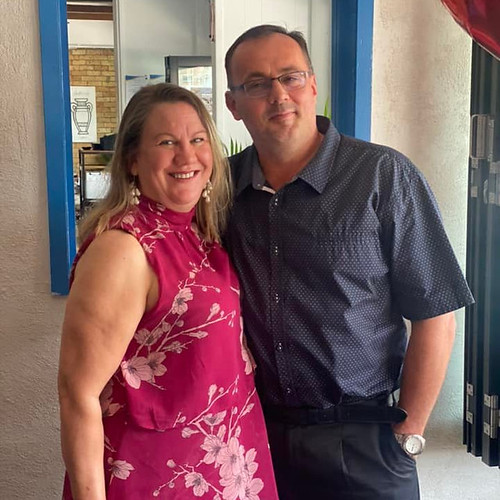 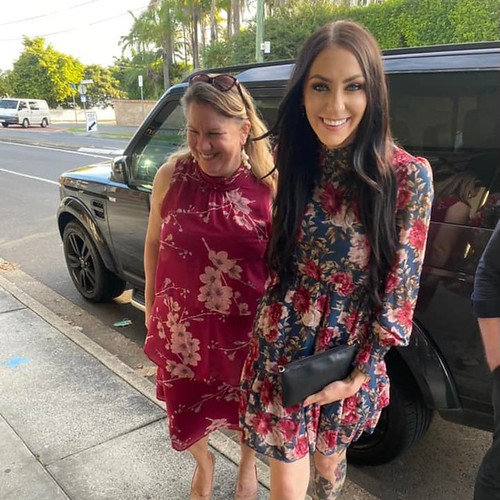 And so endeth the month of April! What was the highlight for you last month?!