You can tell I’ve been busy as I haven’t posted here on the blog for a couple of weeks.

But now I’m back with the latest edition of A Sentence A Day, which will also bring you up to speed on all that’s been happening in the Spaghetti household!

1 October – A typical Saturday for me, with a trip to the library, a bit of grocery shopping, and doing the washing. 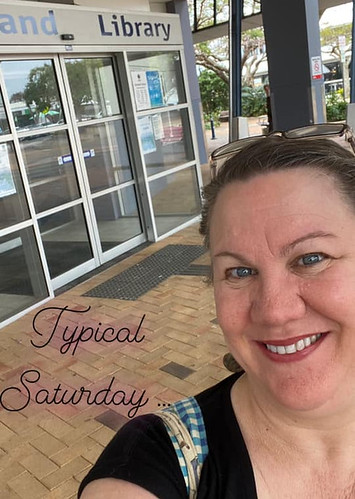 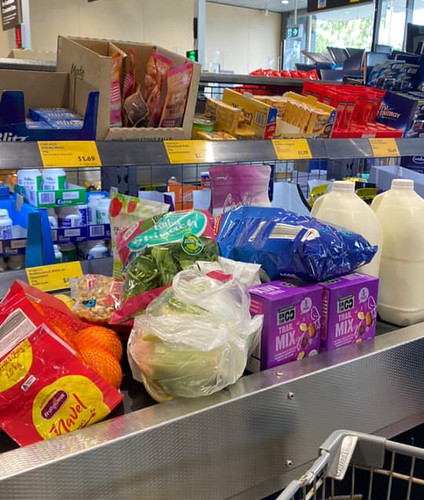 2 October – The husbear is still recovering from his hernia op on 27 September, so we took it easy and binge-watched “The Devil in Ohio” on Netflix.

3 October – Bizarrely, we had a public holiday for the Queen’s Birthday (even though a. her actual birthday was in April and b. she passed away last month). I used the day off to catch up on learning some of the latest SEO stuff – never get a chance otherwise, and it’s important for me to stay on top of the latest developments!

4 October – The husbear and I watched a couple of the videos from our Mediterranean cruise in 2015 – hard to believe, that was 7 1/2 years ago now! I’d love to do a European river cruise one day …

5 October – My second visit to the BNI chapter that meets at the Story Bridge Hotel, as I’m seriously considering joining … 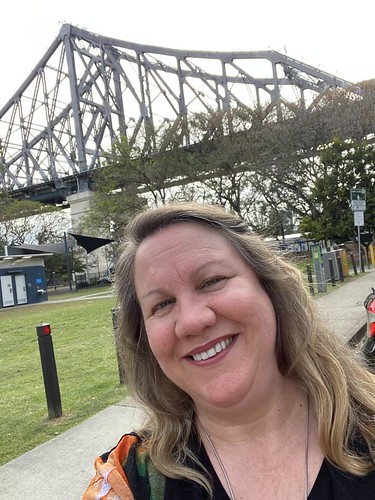 6 October – Today was all about the food! Had a yummy gourmet pizza with roasted vegetables and fetta on it at the lunch meeting I went to; and then the husbear and I had a spontaneous date night at the Wellington Point Hotel, pizza again – but very different – this time it was chicken, brie, and cranberry, also supremely yummy! 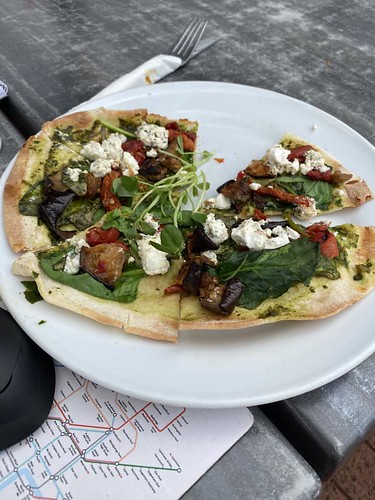 7 October – My lovely personal trainer is back from maternity leave so I had my first session with her in a year! Gosh I’ve missed it. Although, she’s already expecting #2 so I’d better make the most of our PT sessions now as she is due in April … 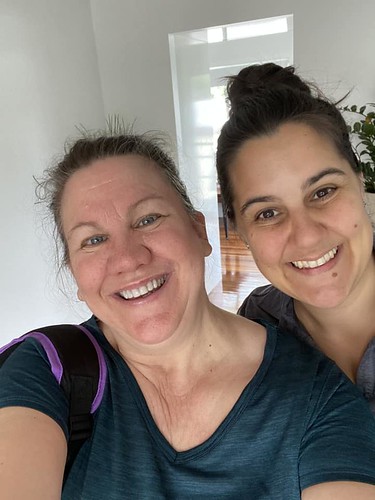 8 October – Weekend at Coochie, we went for a beach walk before breakfast. I could get used to this! 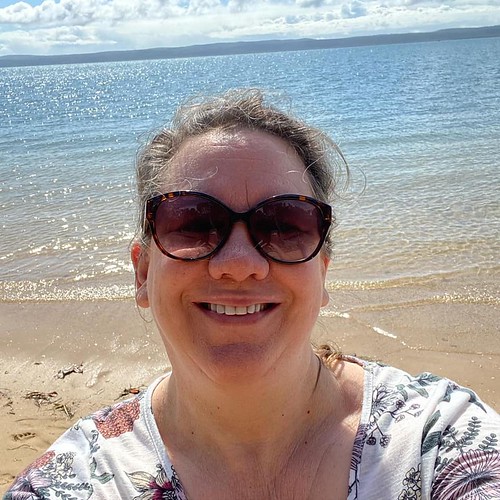 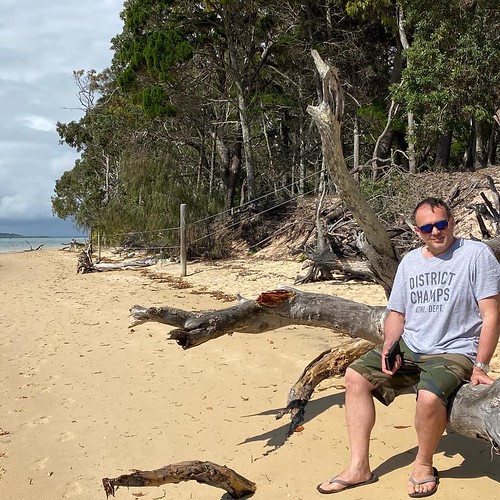 9 October – On the way home from Coochie, we popped in to visit Miss 25 and her husband at their new place for the first time – they have 3 acres, a lot further out of town. I’m sad because they’re further away, but happy because I know they’re happy! 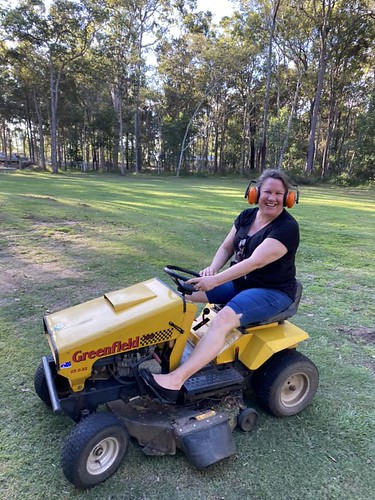 10 October – Ten years ago today I was made redundant … but I’ve already blogged about that. I went for a morning walk and admired all the jacaranda trees coming into bloom! 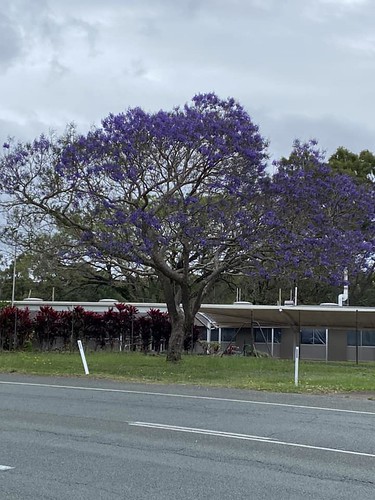 11 October – I’ve decide to join BNI, and sent off the paperwork today! I realised that the only things holding me back were a. it’s a 30 minute drive from my home – but I can listen to podcasts on the way; and b. I have to be out of bed at 5.30am to be at the meeting for 6.45am each week – and how lucky am I really – for many people that’s their standard weekday routine so I realised I needed to “harden up princess”! Plus the husbear and I can drive in together as he works nearby …

12 October – The laundry has piled up so I spent the evening folding Mt Washmore while watching telly. 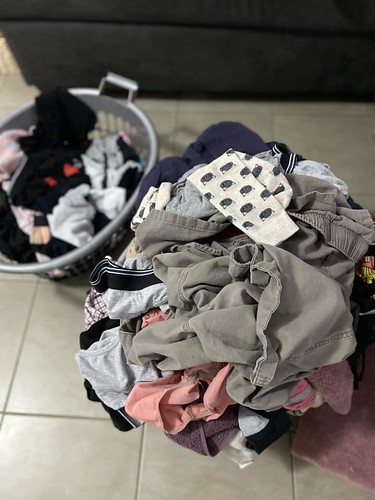 13 October – We popped out for a bit of late night shopping and grabbed some takeaway. 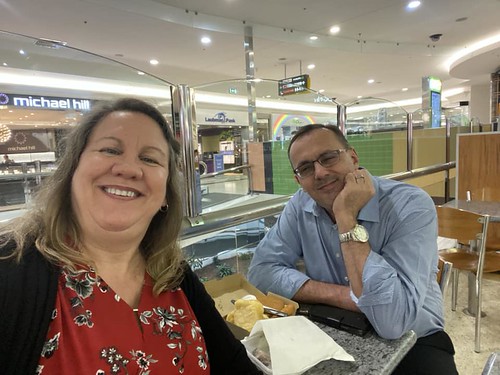 14 October – I got to meet my PT’s gorgeous little boy at my session this morning, he’s about 10 months old. I wish I’d thought to take a photo because he is SUPER CUTE!

15 October – Just a quiet Saturday at home with the husbear, pretty rare these days!

16 October – I went shopping at Carindale as now the weather is warming up I realised there were quite a few gaps in my wardrobe … I shopped til I dropped! 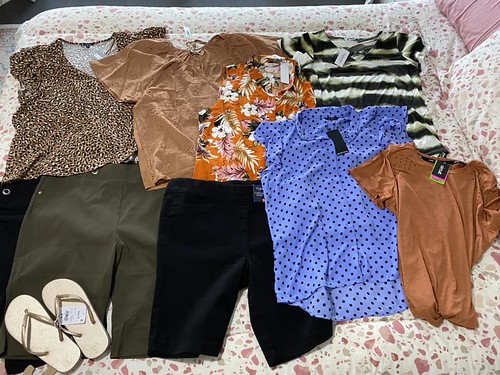 17 October – You wouldn’t believe it – the husbear has just been told he is to work from home two days a week. So guess what day they picked for him, in addition to the Thursdays he already had? Yep, you guessed it. Wednesday. So now I will be getting up early and driving to the city all on my lonesome to go to BNI while he gets to sleep in!!!! Not happy Jan!!!!

18 October – Went for a walk before work. 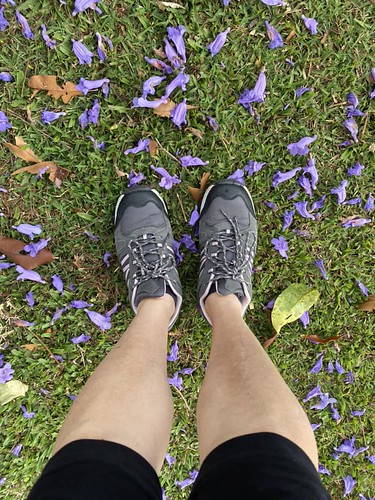 19 October – Have I mentioned that I have pre-diabetes? So I’m on a mission to be more active and cut out most of the junk food from my diet. As part of that, the husbear and I ordered two exercise bikes online and they arrived today! 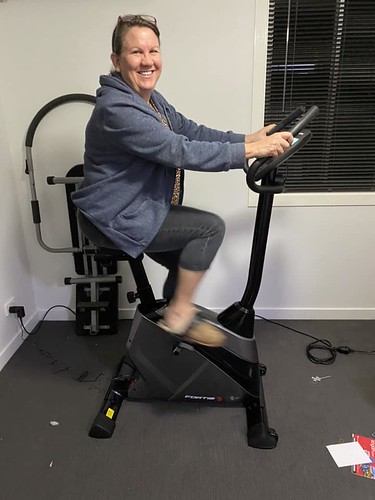 20 October – Headed into the city for some training in using video and reels on social media, with my two assistants Emma and Lisa. As we all work remotely we don’t actually see each other very often, so afterwards we went for lunch at Jimmy’s on the Mall. 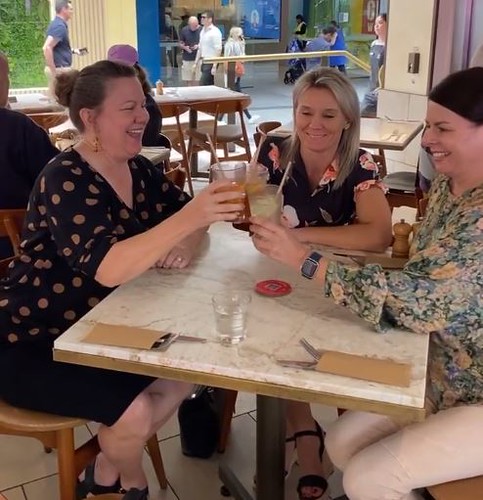 21 October – Started the day with a PT session, then had back to back meetings all day … after work we packed our bags and took the late ferry to Coochiemudlo. 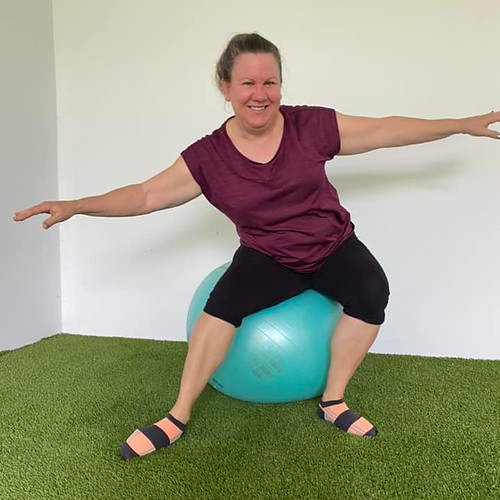 22 October – The weather was rubbish but we still had fun going for a walk on the beach despite the wind and drizzle. 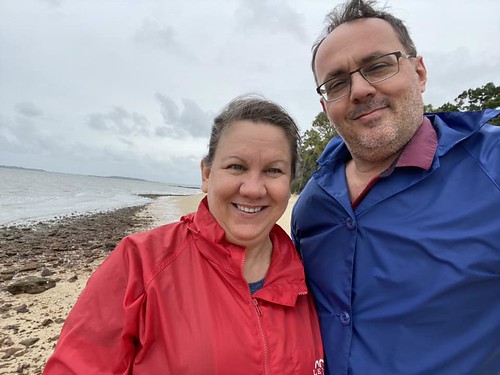 23 October – Back home in time for dinner. We started watching a new series “Just Breathe” on Netflix, while we rode our exercise bikes – it’s about a woman who is lost in the Canadian wilderness and trying to survive.

25 October – We were woken by a thunderstorm at 3am. Later in the day I had a session with my business coach. 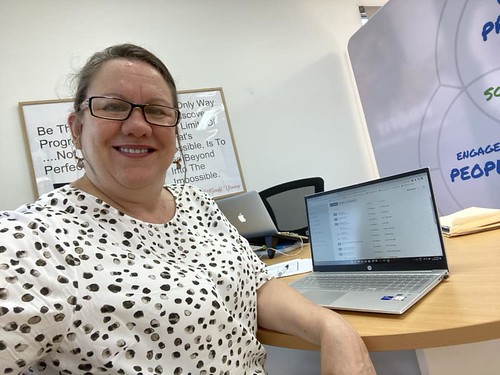 26 October – My first official meeting as a BNI member! I had to rush back to the office (home!) for a 10am Zoom meeting – we have a Member “Hot Seat” once a month in the DIY SEO training program I host. 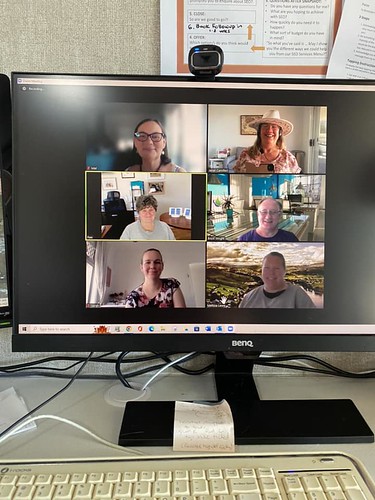 27 October – Learned about Supersizing our Sales at my business mastermind group this morning. 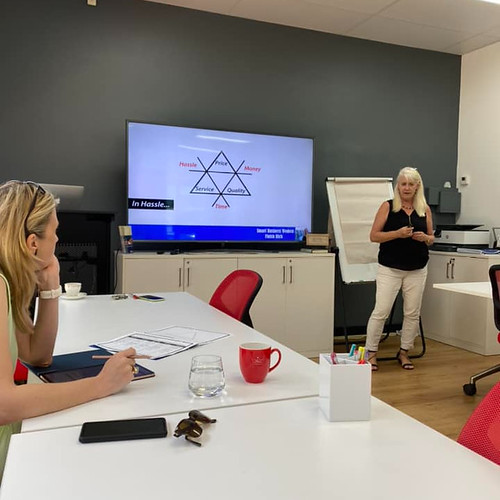 28 October – Snapped this cute pic of Miss Fleur having a bit of a stretch in the office. Look at the curl in her tail – just like a monkey! 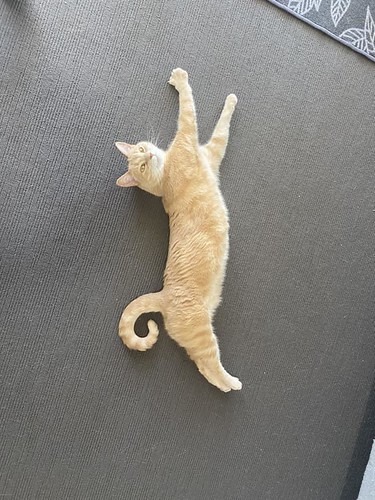 29 October – The husbear and I went away for the weekend in the motorhome. Yes we still have the van (long story, don’t ask …)! At the moment it’s our only vehicle with a tow bar, and the husbear needed to take the trailer to collect some items from his parents’ home in Toowoomba. We used the opportunity to stay overnight with some friends who live out near Wivenhoe Dam – everything is looking so green after all the rain we’ve been having! 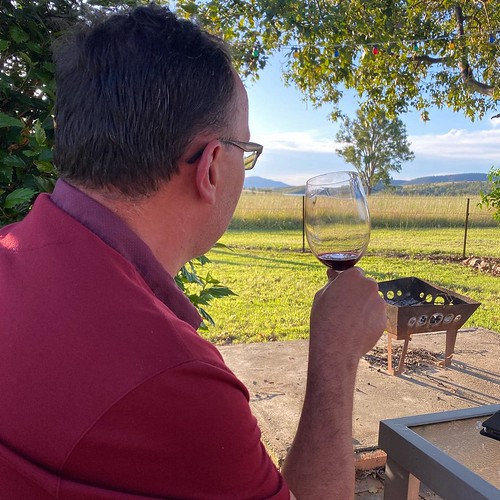 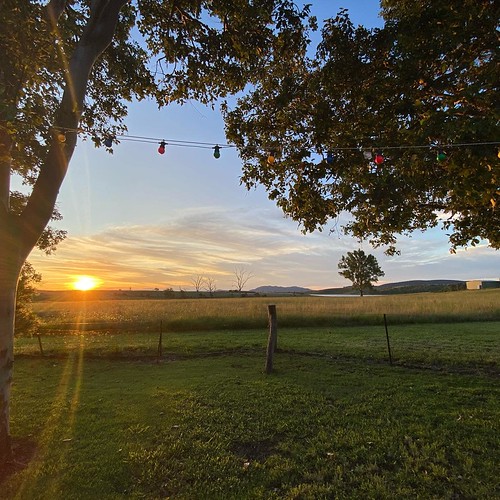 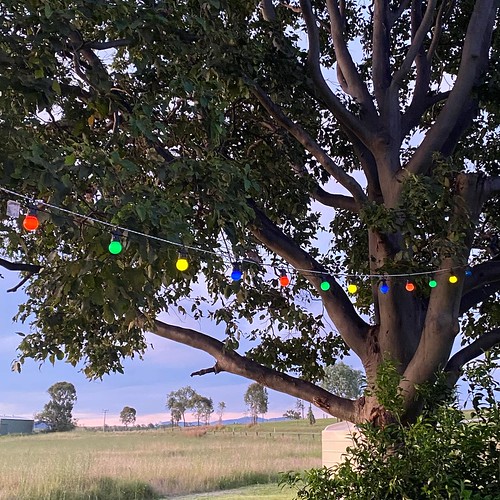 30 October – After a breakfast BBQ, we drove to Toowoomba, had lunch, and collected some stuff. We also stopped in on Miss 25 and her husband late in the afternoon to drop off his birthday present … and I got to meet their new chickens, Penny and Nugget 🙂 . 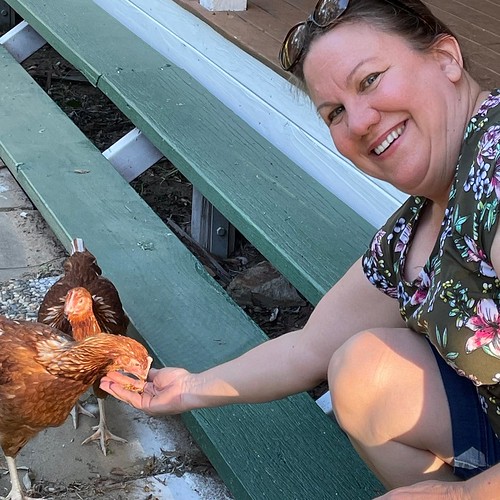 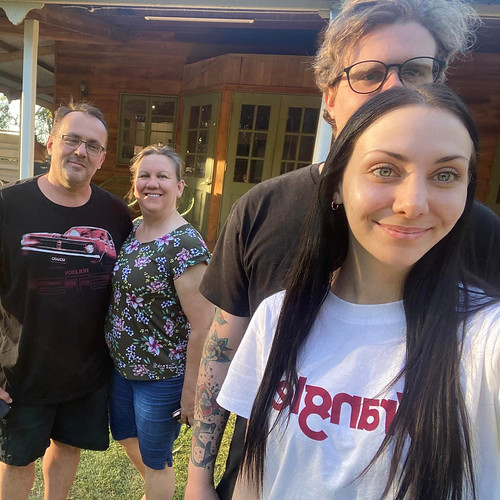 31 October – I didn’t bother getting any lollies ready for Halloween, we haven’t had any trick or treaters in years (so I would have ended up eating them … the lollies that is, not the trick or treaters! … which is not good for my sugar levels).

So now you know why I’ve been a “bad blogger” this month – we were away for three weekends out of the month (it’s a hard life, I know LOL) and that meant that blogging took a bit of a back seat.

Which one is your favourite pic from November? And what was the highlight of your month?!