There is a little island not far from where we live – and it’s our happy place. 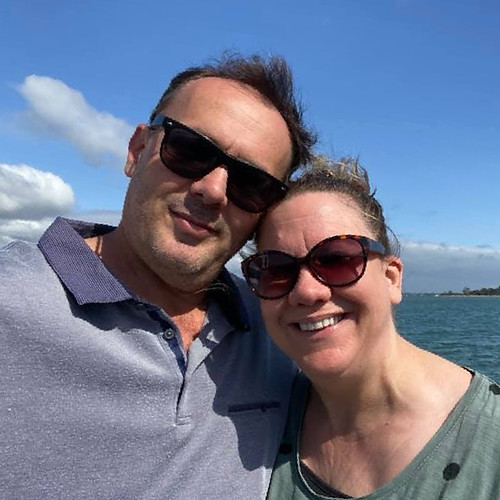 Coochiemudlo Island (or Coochie as it’s affectionately known) might be only 7 minutes by ferry or barge from Victoria Point, but once you set foot on its sandy shores you feel like you are a whole world away! 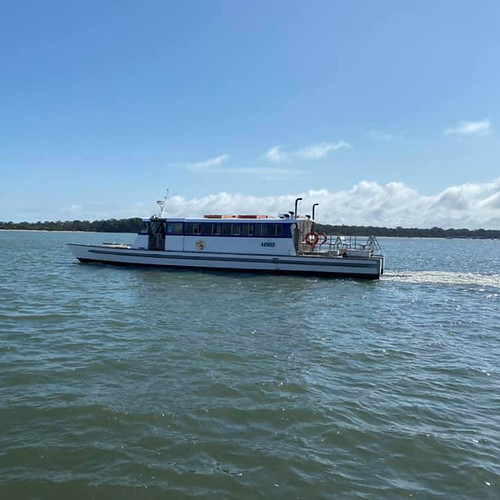 My Earliest Memories of Coochie

After my parents separated when I was ten years old, we lived with my Mum – and my Dad would take us on outings every second Saturday.

I was the eldest of four children, and my youngest brother was nearly nine years younger than me; so it wasn’t always easy to find places or activities that would interest all of us (though roller skating was one of our favourites)!

Several times, Dad took us on a day trip to Coochie.

Part of the appeal was the sandy main beach where water gently lapped against the shore, perfect for kids of all ages to swim and play.

It was a great destination year round for our family, because back then (the end of the 1970’s) we used to hire bikes – a real treat, as we were never allowed bikes growing up due to living on a busy main road.

Being mostly flat terrain, and of course an island accessible only by boat, meant that cars and traffic were (and still are) almost non-existent, so it was perfect for practising our bike riding!

In addition to swimming or bike riding, trips to Coochie usually meant a picnic – or if we were really lucky, a feed of fish and chips (followed by an ice block!) from the takeaway store near the jetty.

As the years passed, we all grew up and then it was our turn to take our children to Coochie.

I have particularly fond memories of one trip about 15 years ago when we enjoyed a day at the beach on Coochie with my sisters and their families. 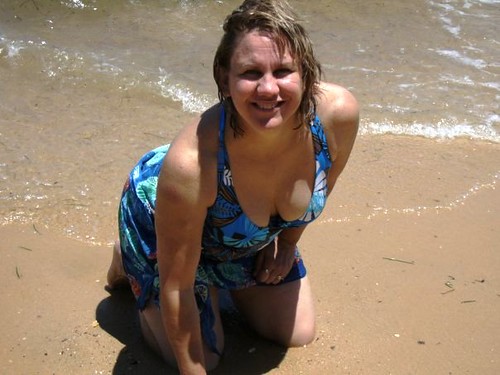 I often jokingly tell people that I celebrated my 40th birthday by running away to a deserted island.

We stayed in a holiday house on Coochie for a week instead. With around 700 residents, one corner store/takeaway shop, and a cafes at the time, it felt pretty deserted!

It was a lovely way to relax and unwind after the busy festive season (my birthday is in January) though I must confess, by the end of the week I was more than ready to return to civilisation!

The husbear and I have visited Coochie many times over the years. The fishing’s not great, but that hasn’t stopped us from trying 😉 .

I particularly love hunting for pippies in the sand along the shoreline. Sometimes we use them for bait; but usually I just leave them in the shallows to return to their sandy beds, when I’m done for the day.

Long before we had Miss Fleur, we had a cat called Tigger and he adored eating pippies. We’d pop them in a saucepan of boiling water and within seconds they would open up, so we could scrape out the meat inside and Tigger would eat them as fast as we could shell them!

About six or seven years ago we walked around the entire island (it’s only 4 square kilometres). While there are three beaches – the main beach, Norfolk Beach and Morwong Beach, the north west shore is mostly mangroves which made that part of our walk a bit more challenging! 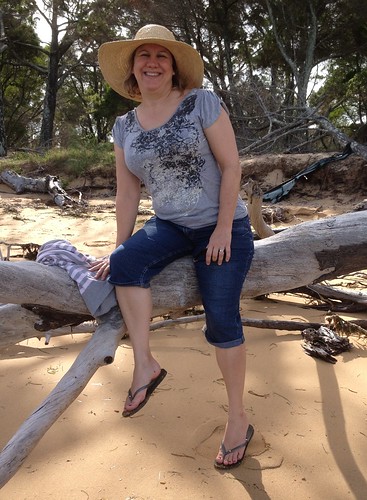 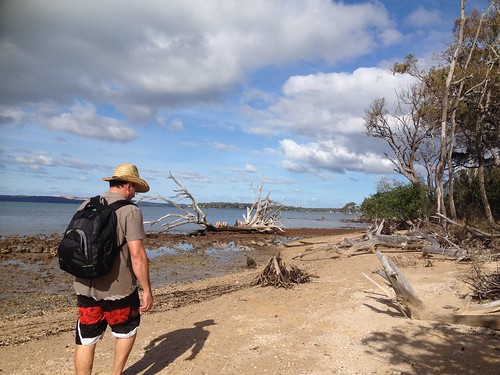 On the summer holidays a couple of years ago, we played golf with our kidults on the 9 hole course.

I’ve also stayed on Coochie for a couple of women’s retreats – once with the Footprints girls (around 1999 at a guess judging from the pic below); and another time with my church women’s group. 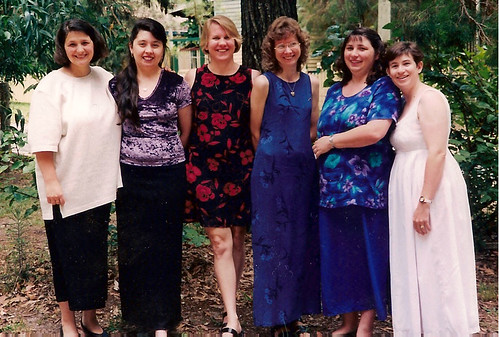 I had to leave the women’s retreat early, and was walking down the main road to the ferry, when a random Coochie-ite pulled over because they’d seen me struggling with my suitcase – and they offered me a lift down to the jetty.

And though I’ve never hitch-hiked in my life – I accepted.

Because that’s the sort of place Coochie is. 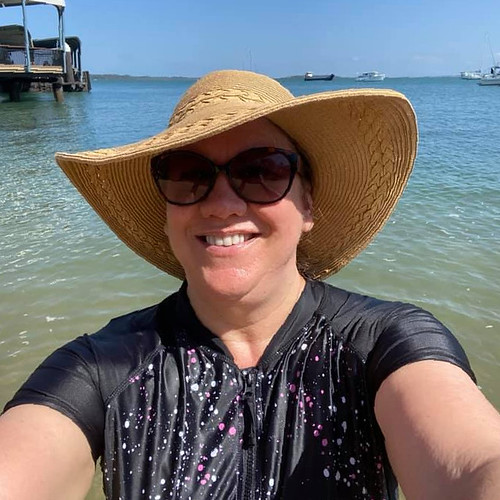 We’ve just got back from a weekend at Coochie, and it’s a wonderful place to go to recharge your batteries.

Strangely, there is no camping permitted on Coochie – but there’s a motel, some holiday units, and quite a few holiday homes if you’re interested in staying.

It’s a lovely peaceful corner of the world although it can get a bit noisy at night with the crying of the curlews!

Where is your happy place?!