Roller skating first appeared on my radar when I was a kid. We used to go to Redcliffe for family outings and there was a skating rink perched right next to the waterfront (weird place for it!). I found it infinitely more interesting to watch the people skating inside, than to look at the scenery (grown ups had strange ideas about what they considered “fun”!).

When I was 12, my mother remarried and I gained three older step siblings. As an oldest child myself, I’d always dreamed of having an older sister or brother!

However, at 21, 18, and 16, my new “steps” weren’t really interested and had their own busy lives. Still, I was particularly fascinated with the youngest, just four years older than me. She seemed so “grown up”, with a boyfriend, a fulltime job, and really long thick hair which I envied. At least one night a week she went roller skating with her friends at our local skating rink – Stafford Skate Centre – and we would often drop her off and pick her up.

It was around the same time that my dad started taking my younger siblings and I to the same skating rink on Saturday afternoons, on the weekends he had access. No trip was complete without some munchies at the snack bar! I loved watching the games – like limbo and Red Rover – and longed for the day when I skated well enough to join in.

Those first few times I spent the whole session clutching the learner rails as I learned to make my way around the separate beginner’s area. I couldn’t wait to learn to skate properly, so I could glide gracefully out on the main floor!

Fortunately, for Christmas that year (probably the last time my mum bothered with getting us actual presents),  I got a pair of strap on roller skates. They were ugly and clunky, but it did give me the chance to improve my moves in the privacy of the cement courtyard in our backyard, rather than stacking it in front of everyone at the skating rink.

Of course once I hit my teens, although I still went skating with my dad and siblings, I made sure to keep my distance. It just wasn’t cool to be seen with your little brother and sisters, let alone a parent!

As I grew older I started going to the Albany Creek skating rink instead, which had only just opened. While Stafford had wooden floors, at Albany Creek we skated on concrete, even if it was a smaller venue.

So many great memories …

In my final year of teacher’s college (1986), I rarely missed a Tuesday Christian skate night. I *could* say it was to get some exercise but I think we both know I’d be lying 😉 . Nah, it was more about hoping to find a fella. Would I meet the guy of my dreams there? I didn’t, but my sister did meet her eventual husband there!

I would tizzy myself up in a cool outfit – white three quarter pants and pastel polo shirts come to mind, not forgetting the bubblegum pink Swatch watch! – before climbing into my orange Datsun 180B and picking up a couple of friends along the way. Good times!

The only thing I hated? I never had my own pair of skates, we just couldn’t afford it. So that meant I had to hire the ugly black “spastic boots” (as we called them) throughout my skating career. Oh the shame!

By the time the eighties finished, so had my roller skating days.

I did go back to Stafford Skate Centre though, about ten years ago. One of my sisters and I took our children and assorted friends on the school holidays, and the place looked much the same – although you could roller blade or roller skate (the kids mostly chose blades). 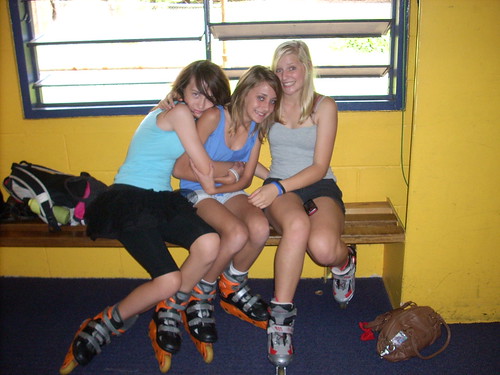 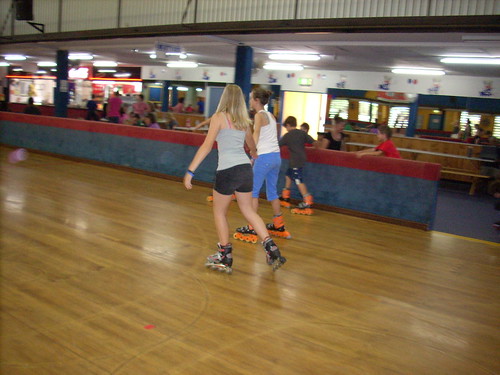 I decided to take a turn around the rink, thinking that the years would fall away and I would impress my kids with my skating skills. Ha! It was a bit like being a learner all over again. I was a lot more scared of taking a tumble and breaking bones than I used to be, and my balance and centre of gravity had also definitely changed!

Roller skating was a lot of fun. It was great exercise, a fun family outing, and a good place to hang out with your mates, so I’m really sad that Brisbane’s last roller skating rink is about to close for good.

I’ve been seeing a lot of eighties fashion in the shops lately … maybe we’ll see some more eighties icons (like roller skating and permed hair) making a comeback?!