In these days of indoor plumbing, you’re probably surprised to learn that there are times when I think a chamber pot would be darn handy.

As a tiny tot, my nickname was “Jolly Juicy Janet”.

I can only assume I was a happy child (and am still a happy person); while the “juicy” referred to my constant need to pee (which also hasn’t changed). It didn’t matter if I “went before we left”; made sure to go before bedtime; or stopped consuming liquids after dinner – my waterworks have always worked too well!

It’s annoying, but after a lifetime I’m pretty used to it – and let’s just say that having an ensuite bathroom is a blessing.

But for years – particularly as a teenager – I hated going on sleepovers at other people’s houses, because I *always* had to get up to go to the loo during the night. And rarely just once – the anxiety of it all usually made things worse, meaning I had to make multiple bathroom trips!

I was so embarrassed about my nocturnal habits, and hated feeling like I was waking everybody up, particularly with flushing of the toilet – it always seemed so LOUD in the quiet of night!

Back when the husbear and I were dating, and living at opposite ends of the city, I would sometimes stay at his place overnight (he would kindly give up his bed for me, and sleep on the lounge). Of  course the toilet was right next to his parents’ bedroom, so I felt like I had an audience whenever I went for a wee walk! A chamber pot – especially one with a lid – would have been a much quieter and more private option. 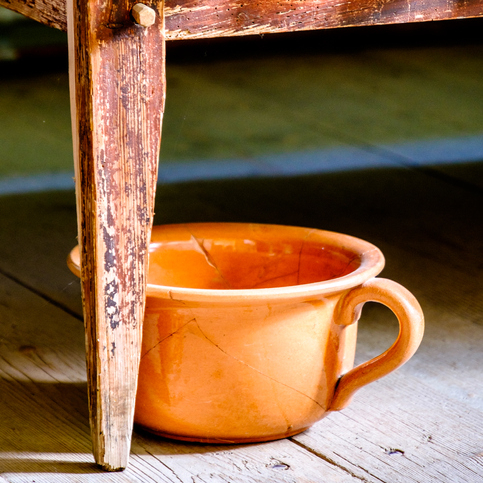 Apparently I’m not alone in my embarrassment … I read somewhere that Queen Elizabeth I had a flushing loo but refused to use it, as the commotion would have alerted the whole palace to her bodily functions 😉 .

The Disaster of the Makeshift Chamber Pot

A few years ago the husbear and I stayed at a mountain lodge for a couple of nights, however being a last minute booking we’d been unable to obtain a room with its own bathroom. We had our own cabin, but had to trek to the amenities block a hundred metres away to shower or use the toilet. Oh, and did I mention it was the middle of winter and temperatures dropped to almost freezing up in the mountains at night?!

However, I thought I had it all figured out! I decided to re-purpose the plastic wastepaper basket in our room as a makeshift chamber pot, so I wouldn’t have to rug up and then go trekking outside in the dark. I could empty and disinfect the bin in the morning, and nobody would be any the wiser!

It was the perfect plan, and I was feeling very smug … until the 2nd or 3rd wee walk of the night when I was horrified to realise the bin had a crack in the base which I hadn’t seen, and as a result the contents had been slowly leaking all over the floor while we slept.

Needless to say there wasn’t much sleeping after that, more of a cleaning frenzy!

A year or two later that mountain lodge was gutted in a bushfire and while it was a tragedy, it was kind of a relief for me. Y’see, I’d always worried that the smell of urine had lingered on long after we’d gone – despite my best efforts …

Please tell me you can top this … what’s your most embarrassing wee story?!