We’ve had some sad times here in the Spaghetti family over the past couple of years.

My father-in-law passed away in July 2021; my mother-in-law, in July 2022 (if she’d lasted just one more day, they would have died exactly a year apart).

Since then the husbear and his sister have been busy with the mammoth task of packing up their parents’ house and belongings. (Although the husbear helped them downsize about 6 years ago, they still had a LOT of stuff! I guess that’s where my Bear gets his hoarding tendencies from!)

I was really touched when the husbear brought home this ring after one of the clean up days. 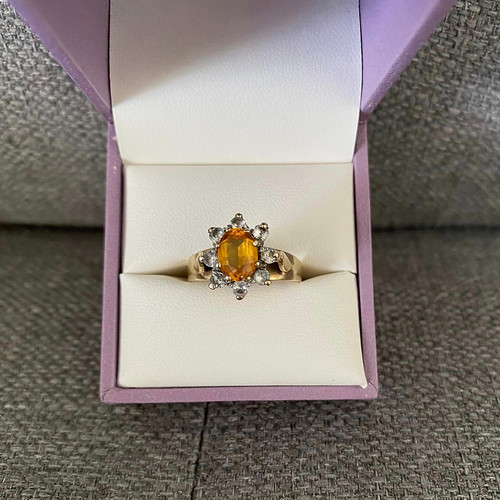 Although I don’t remember ever seeing my mother-in-law wear it, apparently she once said that she thought I would like it; and she was right, I do. I’m not sure what the gem in the middle is – I’m guessing a citrine, though it could be a topaz or even an orange sapphire (but I doubt it). I am honoured to be able to have such a lovely memento from my M-I-L.

In time, their house will be sold and yes, we will receive part of the proceeds as an inheritance. However these things take a looonnnnggg time and we don’t really think about it too much – I guess it won’t seem real until it hits our bank account.

It’s all very different from when my own mother died.

Mum passed away in 2007, though we (my siblings and I) didn’t find out until 2011. Yep, four and a half years later! It’s a long story but if you want to know more, you can read some of my previous blog posts to bring you up to speed.

Needless to say, I inherited … a big fat NOTHING from my mother. Not a cent. Not a photo album. Not a nasty letter from her (all too possible unfortunately, so I’m thankful for this!).  Everything went to her husband (stepfather #3).

I did see a lawyer at the time but there was nothing we could do. We learned at the time that my stepfather had dementia, and he has probably long since passed … and HIS children would have inherited what rightfully should have come to my siblings and I.

But really, it’s not so much about the money (though I do feel we more than earned it, growing up with her abuse).

What I really regret is not having all the photos from our childhood. I have very few, and most of those I “pinched” not long after I left home – and I’m very glad I did, or I’d have none.

But when I stopped to think about it I realised – it isn’t really true that she left me nothing.

I’ve inherited a lot of things from my mother!

It’s easy to see from this list that I’m a “glass half full” kinda gal – in fact, I like to say that the glass is ALWAYS full – half with water, half with air! Though, I did hear an interesting take on it this week – the glass might be only half full but you can always refill it!

It’s all in the way you look at things …

Have you ever received an inheritance?