Today we have a special guest author on the blog – my very own husbear.

He gave a beautiful eulogy for his Mum at her funeral last week, and with his permission, I’m sharing it here with you. I’ve edited is as little as possible, mostly to take out a few identifying details. 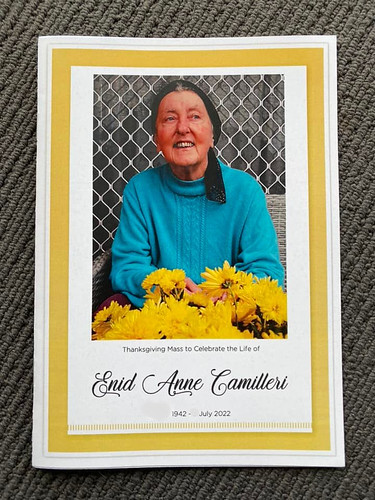 Thank you all for being here this morning to celebrate my Mother’s life. It’s so nice to see so many relatives and friends here, and to have the thoughts and prayers of those who couldn’t make it. 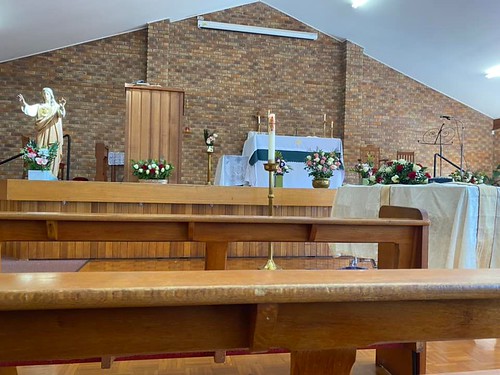 Mum grew up in Pozieres, Stanthorpe, spoke Italian with the family, and worked hard on the family’s orchard.

When she was a young woman, a young man named John travelled from Mackay to the Granite Belt to pick fruit. It was there at a dance in Stanthorpe they met. The following day, John visited mum’s home in Stanthorpe and they talked more, then when he returned to Mackay, they continued writing to each other. The relationship blossomed, and they were engaged, then married in April 1964, and had a beautiful marriage which lasted 57 years. 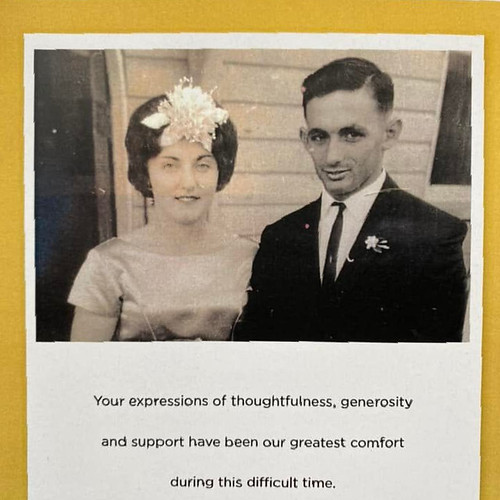 Mum and Dad bought their own property in the 60’s at Alligator Creek, south of Mackay and farmed sugar cane.

Mum taught us kids respect when we were growing up. If we deserved a smack, she would say “If you come here now you will get one smack, if you come later you’ll get two”. We invariably raced off into the cane, because she was such a softy she would calm down later. This is also where us kids learned some choice Italian words!

Mum was protective of us kids, and wasn’t afraid to give teachers a piece of her mind if they were being too harsh.

Mum worked hard with Dad on the cane farm – she would cart cane while dad drove the cane harvester, and on occasion she would tow the harvester out of the mud with our dozer.

She loved farm animals, including rearing chickens for eggs, though she also happily pulled their necks when it was time for roast chicken, and on occasion would butcher a cow or pig at home, usually with the help of her siblings.

In 1980, our family left cane farming to come to the Redlands in Brisbane, and started a strawberry farm.

Mum loved tennis and joined a tennis group in the Redlands. She was always so fit and healthy, and had smooth wrinkle free skin thanks to good family genes, and helped by decades of Oil of Ulan (now Oil of Olay) which she loved.

In the 80’s, mum worked for Curtain Wonderland, rapidly churning out curtains, and was a brilliant seamstress, making my sister’s wedding gown, and the dresses for our bridesmaids, as well as curtains for our family homes, cushions, and upholstery. Her embroidery, painted crockery and applique were meticulous and are now heirlooms.

Mum has always been an amazing cook, and made meals Dad particularly liked, including Maltese pastizzi and Italian food … putting aside her own love of food like seafood, brussel sprouts, and strange things like sheep’s brains, tongue and liver. Mum made enormous fruit cakes which became a favourite birthday present for us three kids.

Mum and Dad became ‘empty nesters’ in 1990. They moved to Helidon, outside Toowoomba and reared cattle.

Mum volunteered for many years at Toowoomba Hospice, making meals and bringing cheer and conversation to the dying. She and dad also worked for many years at St Vincent De Paul, and she would tell us how customers often wanted to be served by her because she gave good discounts – subsidised out of her own pocket.

Mum helped at local churches her whole life, from giving religious instructions for many years at schools and churches, to cleaning and supplying roses for the altar. She loved God, saying the rosary, and loved the beautiful church here, which is why they shifted close by a few years ago.

Mum was a beautiful mother to us three children, and daughter in-law Janet, and son in law ____ … and an amazing nunna to her 10 grandchildren, most of whom are here today. The grandkids would often say she gives the BEST nunna-hugs, or: “I really need a nunna hug”!

Mum was a totally dedicated wife to Dad – they did everything together, from farming, to travelling overseas to Italy, Germany, Malta, England, Medjugorje, Prague, France and other countries … to going to Mass daily, and having cups of tea in the sun on cold winter mornings.

Mum was devastated when Dad passed away, last July. She had put aside her own health to care for Dad, and only got a lump checked after he died, which turned out to be bowel cancer which had spread after going unnoticed for possibly 2 years.

Ironically, after all the volunteering Mum did at the hospice, she never went there herself because my lovely sister chose to care for her full-time at home, and myself to an extent, when Mum started chemo about 6-7 months ago. Poor Mum endured 14 rounds of chemo, and the doctors said she was a strong woman to endure that and keep coming back. It was 364 days after Dad died that mum passed away…

Mum has gone home to God now and is in a better place without any discomfort. We know you are looking down on us Mum; we love you and may God bless you.