Ever since I can remember, I’ve had mixed feelings about the story of the Prodigal Son.

Jesus shared this story as a way of showing that God is a loving Father, always ready to forgive, and welcome back with open arms those who have wandered far from Him. 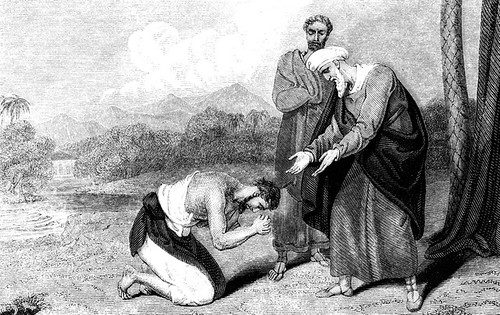 It’s a story that many people find incredibly comforting (including me, as I am one of those who have wandered from faith).

However as a girl, I might have missed the point – because I felt sorry for the other son. You know, the faithful one.

The one that stayed on the farm and helped out his dad.

The one that followed the rules.

The one that did the hard work.

The one that was up early every morning.

The one that made space in his busy days when family members needed help.

The one that put up with them when they were being just plain annoying (as families can sometimes be).

The one that took care of them when they were ill.

The one that did the right thing, because that’s just the sort of person that he was.

The one that didn’t do it for awards and applause and acclaim.

But at the same time, felt a real kick in the guts when that no-good brother of his came home again and was so celebrated, with the killing of the fatted calf and all …

If that same story played out today, instead of in Bible times, I’m pretty sure the faithful son would have had that 80’s hit song running through his head: What about me?!

As a kid, I was a real goodie two shoes which is no doubt why I identified with the faithful son.

But I kept my thoughts to myself, because by the time I was a teen I was very active in church and youth group circles and it wasn’t the popular view.

Many years later, and the husbear and I were still faithful churchgoers, and our own kids heard various versions of The Prodigal Son over and over again.

Why do we only ever hear testimonies from people that really went off the rails?”

He had a point. Where were the guest speakers and testimonies and stories to inspire the ordinary people? The ones who went to school, did their best, tried to help others, got a job, became a responsible citizen? The ones who never really went astray, or fell into bad company, or became criminals. The faithful ones?

Sorry to be cynical but just like everywhere – sex (drugs and rock’n’roll) sells.

The Prodigal Son story has been on mind a lot of late, because it’s become a lot more personal.

We have been watching things play out, and are astonished at how people are fawning over the Prodigal despite some really terrible things they have done.

While I’m all for forgiveness: What if the person doesn’t seek forgiveness, or even show remorse? What if they would have kept up their wicked ways if they hadn’t been caught out?

Doesn’t anybody realise that these Prodigals are in such a sorry state because of their own actions, and the decisions they have made?

What about the people they have hurt along the way?

Most human beings are sincere, genuine, caring. It’s only natural when we come across somebody down on their luck, to want to reach out and help.

However … God has given us brains, and we need to use them.

Let’s say you see somebody in dire straits financially because they frittered away every cent they had – due to an addiction to booze, drugs or Aldi specials – and this hasn’t changed.

As long as they have a roof over their head, clothes on their back and food in their belly, do they really need you to rescue them? I’m sure there are plenty of other, much more deserving, cases!

And how do you know if you help out the Prodigal, that they won’t waste your money too – and then want more handouts?

Why the feck do people REWARD the Prodigals?

The Prodigal has always been the favourite and it seems they always will be. Despite everything.

Meanwhile the quiet achievers just keep on keeping on. Doing what they’ve always done. Picking up the pieces that the Prodigal has left in their wake.

As one of the faithful ones I can tell you: it hurts.

No doubt I will continue to mull over the story of the Prodigal Son, as many have before me. If my thoughts also resonate with you, here are a couple of other posts you might like to read:

What’s your honest reaction to the story of the Prodigal Son?!