Fleur and Seth are not impressed. 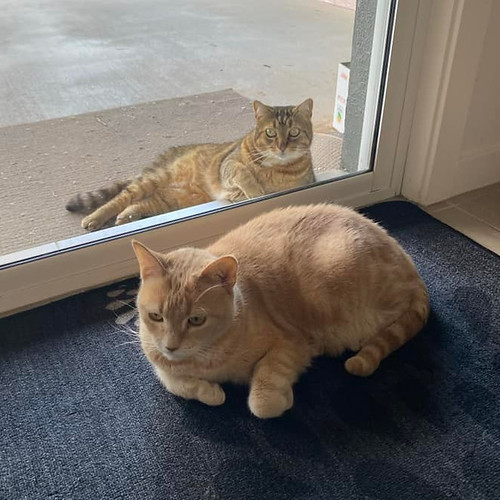 The husbear has a bee in his bonnet about only feeding the kitties dry food.

He’s been mentioning it for quite a while, inspired by the example of Miss 25 who mostly feeds the grandkitties cat bikkies – and they seem quite happy with that.

Side note: Annabelle, Delilah and Egg have a new sister, Maisy! 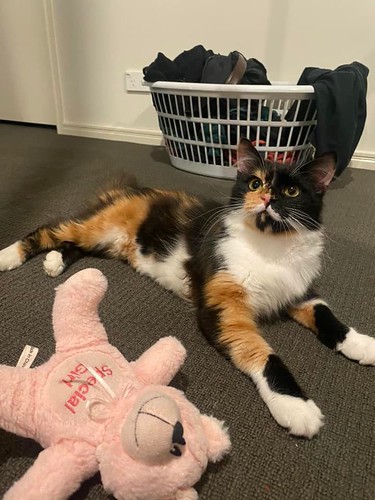 She’s very sweet and even though it’s only been a week, they all seem to get along just fine. Not like my two! Despite being part of the same household for most of the last 5 or more years, they still barely tolerate each other.

Although having said that … we were amazed when we got back from holidays earlier this month (we took Fleur with us, while Seth stayed home and was looked after by Mr 27 – it is HIS cat after all!), to see them greet each other by touching noses – I even got a photo or nobody would have believed me! 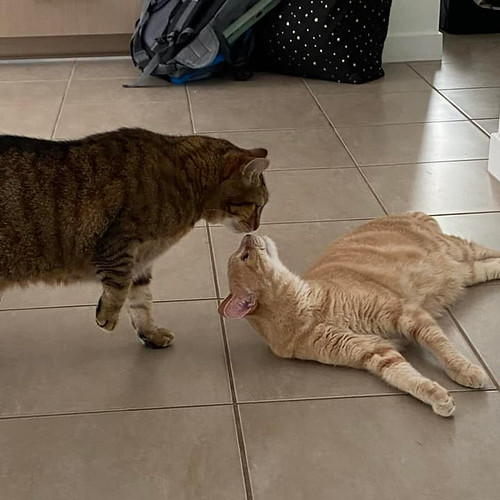 But back to why our cats are revolting (as in rebelling – although Fleur does have a bit of a reputation as the “World’s Worst Cat“).

We usually feed them wet food, supplemented by kibbles. However they are quite fussy:

With the husbear working from home this month due to the Omicron outbreak, he decided the time was right to make the switch. He’s taken on the kitty feeding duties temporarily, and has even joked that he will hide the remaining wet food so that I don’t cave!

(He’s actually away for a boys’ weekend as I write, and I *did* give them wet food the first morning – but only because we’d run out of the yummy cat biscuits that they like. So I’m a good girl really!)

It’s gone a lot better than I expected – the main issue has been that the cats seem to miss the “ceremony” around meal times.

Because they always have a bowl of kibbles available, we thought they’d feed themselves when hungry – but although they do use this for snacks, they still start fussing when it gets to their usual meal times.

Fleur in particular lets me know when she’s hungry. Apart from making the usual song and dance (“Miaow, I’m starving, nobody has fed me for at least three years, I’m buying a plane ticket to Ethiopia because I’m sure I will be better fed there … “), if that doesn’t get results, she has a couple of other tactics:

So we are still feeding them at the usual times, but instead of wet food we are giving them a handful of the 7+ kibbles mixed with a few of the Temptations treats to help them make the transition. 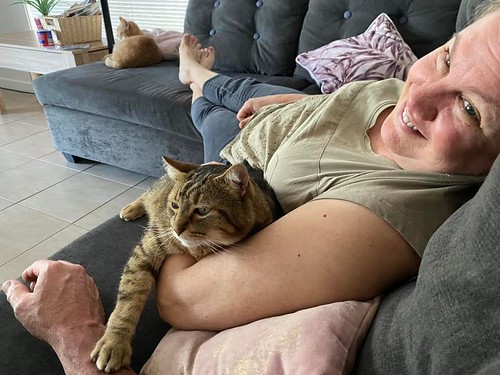 I’m not quite sure what the point of the whole experiment is; the husbear says it will save us money (though I really don’t think it’s a big deal in the general scheme of things), and make it easier for us to go away for weekends.

Will it last? Who knows! But one thing I *have* noticed … Miss Fleur’s litter tray is a lot less stinky!!!!!

What do you think is better – wet food, dry food, or a combination of both?!