It’s been a long time since I have had a “bestie” (best friend) – apart from the husbear, that is.

In fact I don’t think I’ve had a bestie since my school days! I often read novels or watch shows that depict characters that have been besties ever since they met at school, but it hasn’t been the case for me.

Grade 1 – Truth is, I was a shy little mouse and hated school and my teacher, crying and resisting every morning. I wanted to be at home with my mum and my two little sisters!

It didn’t help that I’d gone to kindy and pre-school in a different suburb, and the other children had already formed friendship groups.

Eventually I made friends with Carrie Forsythe. I don’t remember much about her, except that she had to repeat the year so I had to start Grade 2 on my own again.

Funnily enough I bumped into Carrie not long after I finished school – she was working as a receptionist for my doctor!

Grade 2 – I had to start afresh in Grade 2, but this time I had a lovely teacher. I also quickly became friends with Anita Lowe; one particularly vivid memory is of marching around the classroom with her before school, clutching our teddies and singing “Teddy, teddy, teddy, teddy” … must have driven the teacher mad! We even had the occasional play dates at each other’s houses. My mother used to say that Anita had beautiful manners, but hated that she was the one who introduced me to the evils of Milo addiction 😉 .

Sadly, Anita’s father (I think he worked in a bank) was transferred and so the family moved to Proserpine at the end of the year.

Grade 3 – I palled up with a girl called Tracy Betts. She had an older sister named Vicky, and they had an above ground pool. We had lots of play dates and sleepovers too.

Grade 4 – Our friendship waned, as Tracy was good friends with a couple of girls that seemed more like bullies than friends to me. During Grade 4 my new best friend was Toni Rudd. Like me, she wore glasses, however hers had dainty gold frames whereas I had horrible thick coke bottle lenses with ugly brown frames!

Toni lived in the street behind me which made it really convenient for play dates, but only “official” ones. My parents were never the sort to let us roam the streets or just rock up at the neighbours to play after school.

Grade 5 – Toni and family moved to Bellbowrie, another suburb of Brisbane, which may as well have been on another planet as far as I was concerned.

My besties were Megan Jubb and Yvette McArthur, and I showed my devotion by naming my new doll after them. I called her “Elizabeth Joy” which was a combination of their middle names.

Megan was the one who taught me to ride a bike; we were never allowed them as we lived on a main road. However Megan’s house backed onto a park and a football field, and we would practice riding on the gravel in the car park. I definitely remember the gravel as I stacked it more than once!

Many years later, when my kids were little, Yvette and her husband and three kids came to our church for a while, even though we were on the opposite side of town to where we grew up. She didn’t recognise me at first but I knew her instantly! Although we were friendly, we didn’t become besties again.

Grade 6 and Grade 7 – Yvette was placed in another class, and I don’t remember what happened to Megan.

I became friends with Stacey Clark instead, a friendship that continued into Grade 7. Stacey had two much older sisters, which made her really cool in my eyes.

Grade 8 – When we started high school, Stacey and I were placed in different classes. She quickly made new friends; however I had the misfortune to be placed in a class with an uneven number of girls, with nobody that I knew very well. It was a lonely time. During lessons I ended up sitting by myself mostly; I still hung out with Stacey and her new friends at lunch breaks, but I wasn’t too sure about them …

Grade 9 – By the end of Grade 8 I had found a friend of my own, Cathy Pratt, who had recently arrived from Melbourne. Cathy and I both loved roller skating, penpals, and had a lot in common. We started a magazine for penpals that year, “Cheeky”, which was a lot of fun! It was thanks to Cathy I discovered I could actually sing – in Grade 12 we both joined the Happy Wanderers Choir, though we weren’t close friends by then.

Grade 10 – In Grade 10 my bestie was Martha Comino, a girl from a very traditional Greek family. I think we met in Grade 9 when we both volunteered as library monitors. Martha was obsessed with Duran Duran, especially Simon Le Bon! She always had a ‘thing’ for blonde fellas, and I used to wonder how that would work out for her as I knew she’d most likely marry somebody else from the Greek community – which she did, but guess what, he had fair hair!

The husbear and I attended her wedding when I was pregnant with Miss 25, the first and only time we’ve been inside a Greek Orthodox Church. We’re thankful for the experience now, especially seeing as we will be having our own Big Fat Greek Wedding at the end of the year when Mr 27 gets married!

Grade 11 + 12 – While I was still good friends with Martha, there was this girl who kept turning up in all my classes – pretty rare when everybody is doing different subjects. Not surprisingly, Melanie and I became besties which lasted through Grades 11 and 12. We even started going to the same youth group!

It was a friendship that continued for many years, even though she married and had children a lot earlier than I did. I was a bridesmaid at her wedding:

And her daughter was a flower girl at mine about five years later: 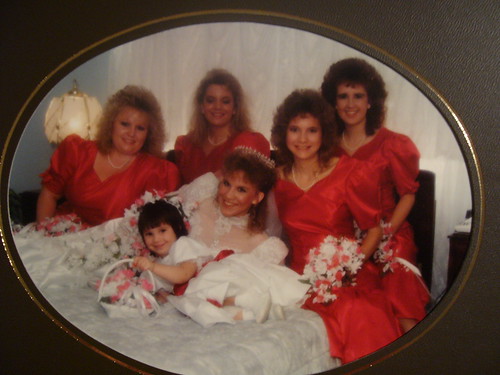 Unfortunately, I also had to deal with quite a few bullies, especially in my earlier years.

Grade 1 – Her name was Tracey (can’t remember her last name), and she was bigger than me (which wasn’t hard, as I was a tiny, timid little thing!). She used to wear navy blue or dark green underpants, revealed to all the world when we played on the monkey bars. I begged my mother for coloured knickers too, instead of boring old white Bonds cottontails. I’m surprised that I wanted to have the same as Tracey, as she delighted in tormenting me. She was still around in Grade 2 but must have found somebody else to pick on because I don’t remember her after that, although she was still there according to this photo!

Often the bullying was at the hands of one of my bestie’s new friends. For example:

Year 3/Year 4 – A couple of Tracey Betts’ friends would pick on me. One time I got so angry, I hit the girl over the head with my (steel) fife! Ooops. I was terrified of getting into trouble but it didn’t turn out to be a big deal. Guess that’s what happens when you have a reputation for being a goody two shoes …

Year 6/7 – There must have been a lot of hormones flying around, because I can remember a lot of bitchiness and fighting in my friendship group, and shedding a lot of tears over it. Girls can be absolutely horrendous to each other sometimes …

Year 8 – I’ve already mentioned that I wasn’t too sure about Stacey’s new friends; I’m pretty sure they bullied me, especially the Queen Bee of the group.

One memory that really sticks out is when I proudly brought in my new Dolly magazine, and as we flicked through the pages together, the Queen Bee made fun of various things and used a pen to deface all the photos. I probably didn’t let on, but it really upset me.

I was miserable and hating spending breaks with them. Eventually I plucked up the courage to ask some other girls if I could sit with them at lunch times.

The funny thing is that the Queen Bee sent me a friend request on Facebook several years ago and I decided to let bygones be bygones, and accepted. I’ve never been game to ask her if she remembers; but let’s just say karma has caught up with her and she has faced some massive challenges in life.

I wonder what the rest of my bullies and besties are up to these days?

Do you have a bestie as an adult, or do you think it’s one of those things you grow out of – or are you still friends with any of the besties of your childhood?